The Fog over the harbor was thick as the day began, but even gray skies could not dampen the spirits of our Team Hydro swimmers and volunteers who gathered in Boston on Saturday for another great Harbor Swim!

Team Hydro’s enthusiasm made the day brighter for all present at the swim thanks to volunteers who provided crucial event help — not only on land with event registration but also out on the water as kayak guides for swimmers! With the fog so thick one could not see across the channel, much less across the harbor, our volunteers’ role became more crucial than ever!

In fact, as the start time approached, the dense fog remained so thick and visibility so poor, it was clear that crossing the Harbor would jeopardize swimmer safety, the Coast Guard quickly approved a unique and scenic course change which took swimmers on an exciting and scenic tour of Boston waterway off the Bay!  Kayakers lined the new course and swimmers raced under historic bridges and past some iconic Boston sights including the Boston Tea Party Ship, the Children’s Museum and Pop Art Milk bottle, all the way to South Stations mid-river Pyramid before heading back to the finish at beautiful Rowes Wharf and Courthouse!

With their 50 bright orange caps setting them apart from the rest of the field, Team Hydro swimmers raised awareness for hydrocephalus even as they swam!

All swimmers completed the event, with Team Hydro swimmers inspiring hundreds of spectators gathered all along the shore with their perseverance and teamsmanship!

As is typical for a Team Hydro event, our group was made up of people from a variety of backgrounds some connected to hydrocephalus and others just generous people who heard about the cause and found a way to support it!  Our ranks included students from Harvard Medical School and MIT, a CSF researcher from Children’s Hospital, doctors and researchers from Harvard and surrounding hospitals, a father of a hydrocephalus patient from Canada, grandparents of a patient from Georgia, and lots of friends and family!!  Stories were shared and all participants went away armed with even more resolve to fight for additional hydrocephalus research!

We could not be more grateful for EVERY Team Hydro swimmer, on land support, on the water volunteer and donor!  Thanks for making the 2017 Boston Harbor swim a resounding success!  Most importantly, thank YOU for helping us ensure that Hydrocephalus research will continue for the 1 million people seeking to live with this difficult condition! 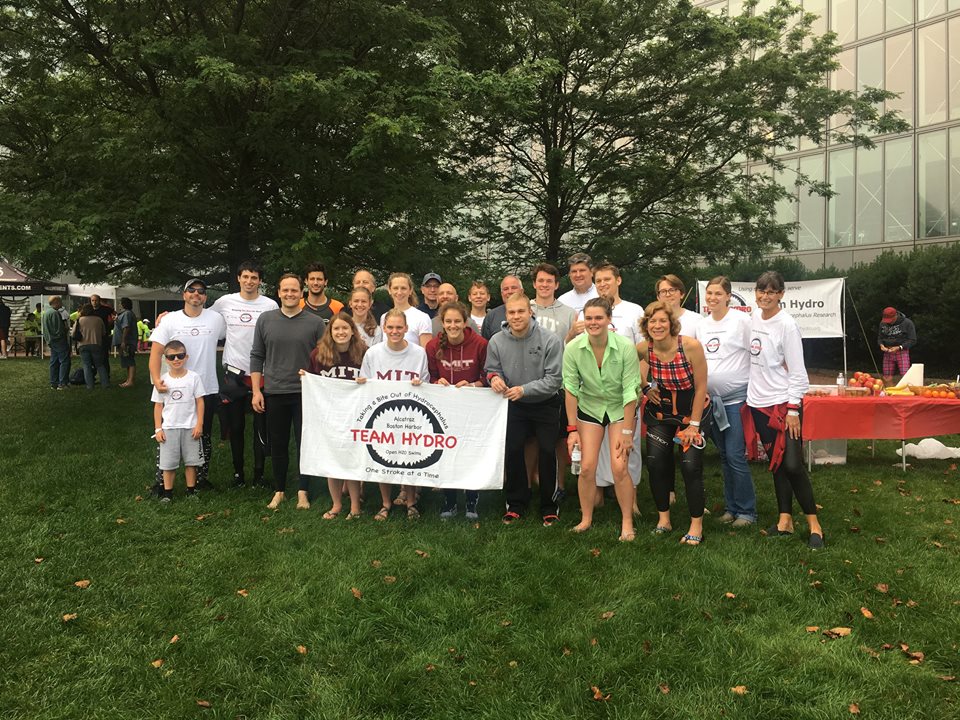 Team Hydro can’t wait to see all our Swimmers and On-land Supporters on Sunday as we make our 5th Annual crossing of the Boston Harbor in support of Hydrocephalus!!
Note: VOLUNTEERS STILL NEEDED for this race.  If anyone is interested in volunteering (for free) please sign up HERE and check the join team hydro box.  Volunteering can be setup on land or kayaking with the swimmers in the water!  Raise organizers will donate to our cause for your efforts!
IMPORTANT INFO FOR SWIMMERS:

Arriving for the Swim:

Parking and check-in will be at the finish line by the John Joseph Moakley Courthouse, from 6:50-7:50am.  Once you arrive and check-in, look for a Team Hydro banner!  We will provide a secure place for you to keep your stuff during the swim.  Around 7:30am, we will take a group picture and all head across on together on the water taxi.  We will also provide you with a special team hydro wrist band, cap, and the story of a patient with hydrocephalus!
The Wrist Band
You’ll be given a band which bears the name of a person who is living with or has passed away from hydrocephalus.  It allows you to dedicate your swim to someone who knows first hand the challenges hydrocephalus can bring to the lives of patients and families with the condition.  You’ll also get the chance to read a brief personal story of the person it honors.  Every year we are told by those who wear the bands and read the stories that they are inspired to swim faster than ever as a result!
The Cap
Officially sanctioned by the Sharkfest organizers, these special edition caps will help you stand out to family and friends–and other swimmers–as a member of Team Hydro.  By wearing the cap, you will also help raise awareness for this important cause!
Don’t forget to make a fundraising page if you haven’t yet at donate.teamhydro.org.  As always, Team Hydro underwrites all our own costs, so 100% of money raised goes to research (unlike, unfortunately, the Sharkfest registration fees that go to the race organizers).  In case it helps, here is a template for a possible letter to send to your friends!
We are so grateful for your participation in this swim that means so much to us.
Thank you so much, and Go Team Hydro!
The Finlayson Family