The second annual Dolphin Dash was an amazing success!  Over the course of 3 hours, 34 swimmers (ages 3-47) swam 2,022 laps or approximately 32 miles to raise funds and awareness for hydrocephalus research!  Most swimmers were 5-10 years old.  The longest swimmers were Hannah J (age 9) and Libby B (age 10) who swam 2.5 and 2 miles, respectively!  Despite their young age, 27 of the 34 swimmers swam at least 1/2 mile or more!  The youngest swimmer was 3 years old and he swam 7 laps! Everyone was blown away by the endurance and commitment of the kids.  This cause truly touched their hearts and brought out the best in them!  Three coaches lifeguarded the event and were so moved by the efforts of their swimmers, that one of the coaches couldn’t hold back any longer and jumped in and swam a mile! 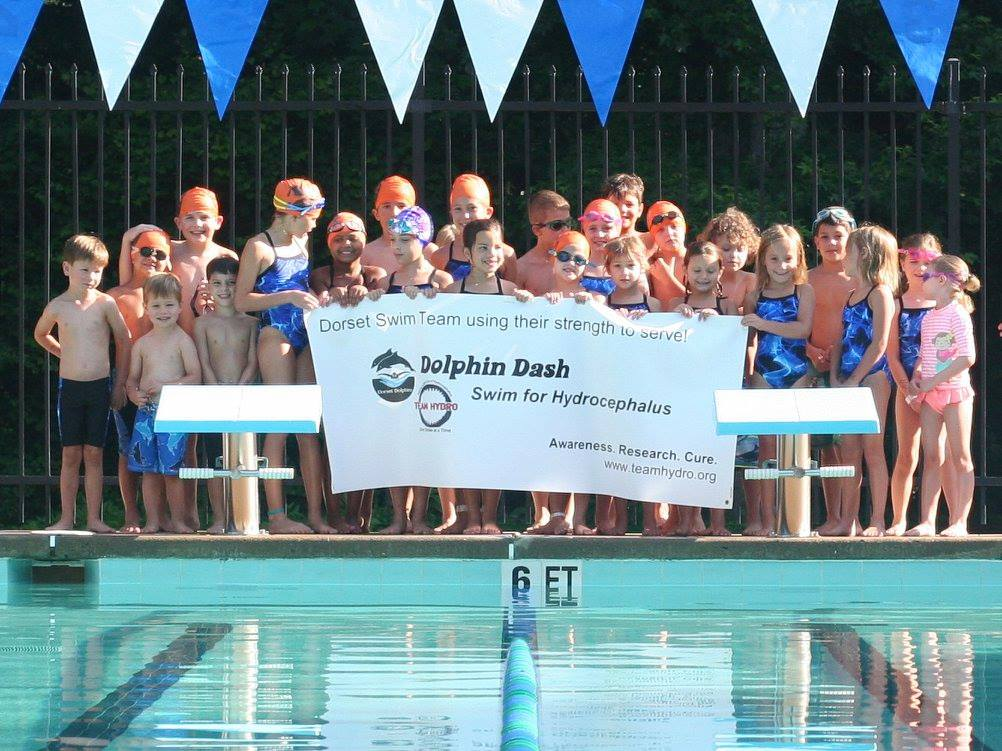 The event began as participants heard the stories of Parker and Lilly, two of their teammates living with hydrocephalus! Lilly and Parker kicked off the swim by swimming the first lap! Parker continued to cheer on his teammates, which included his younger brother (7) who swam a mile and sister (5) who swam 50 laps!  Lilly swam a mile and so did her sisters Addie (8) and Chloe (8), as well their Dad TJ.

It was a multi-generational family affair, as Lilly’s grandmother manned the sweet treats concessions stand, while Parker’s Dad was keep the crowd rocking as DJ!  About an hour into the event an ice cream truck stopped by, which was a big hit, and even the owner of the truck was moved by the cause — he is donating a portion of his proceeds to Team Hydro!

The Dolphins really gave it their all.  In the weeks leading up to the swim, one family made flyers about the swim and put them in neighboring mailboxes, while another family held a lemonade stand and donated proceeds to the cause.  What an inspiring show of selflessness and love!

Of course, it wasn’t ONLY about swimming, donations, and fun!  Those attending the swim had the chance to learn more about hydrocephalus, as stories of people impacted by Hydrocephalus were displayed all around the pool!  Swimmers wrote inspirational messages on blue balloons, which were ceremonially released at the end of the event, as a symbol of hope!

We are SO grateful to have the Dorset Dolphins as a part of the Team Hydro Family.  What an inspiring group of kids and parents (and grandparents)!  Thank you to all of you — you truly are a shining example of using your talents to serve and lift up others, making the world a better place!

So far, the Dolphins have raised nearly $6,000 — every penny of which will go toward supporting hydrocephalus research!  If you’d like to show these kids their efforts are valued and appreciated, you can make a donation here! 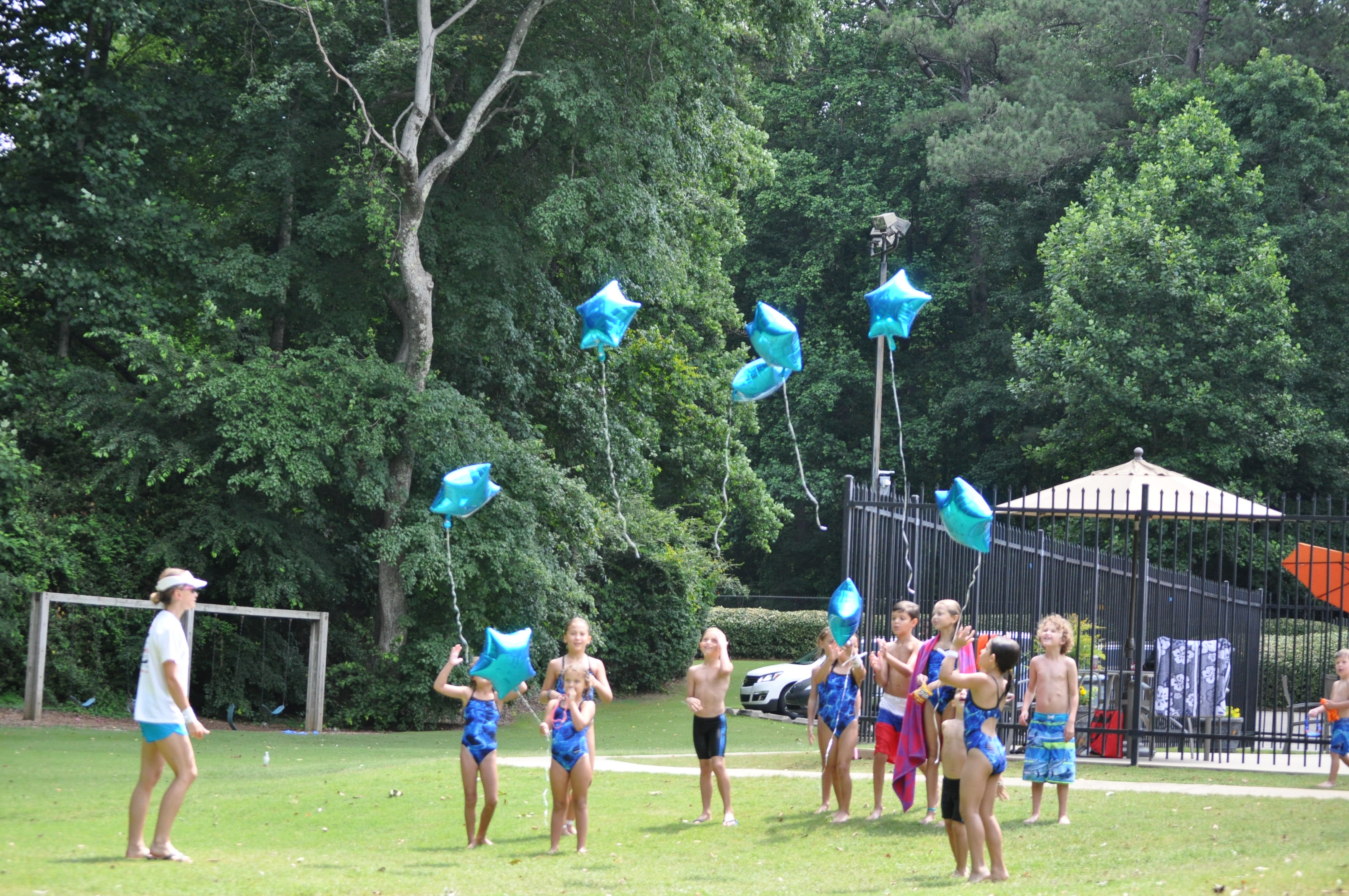 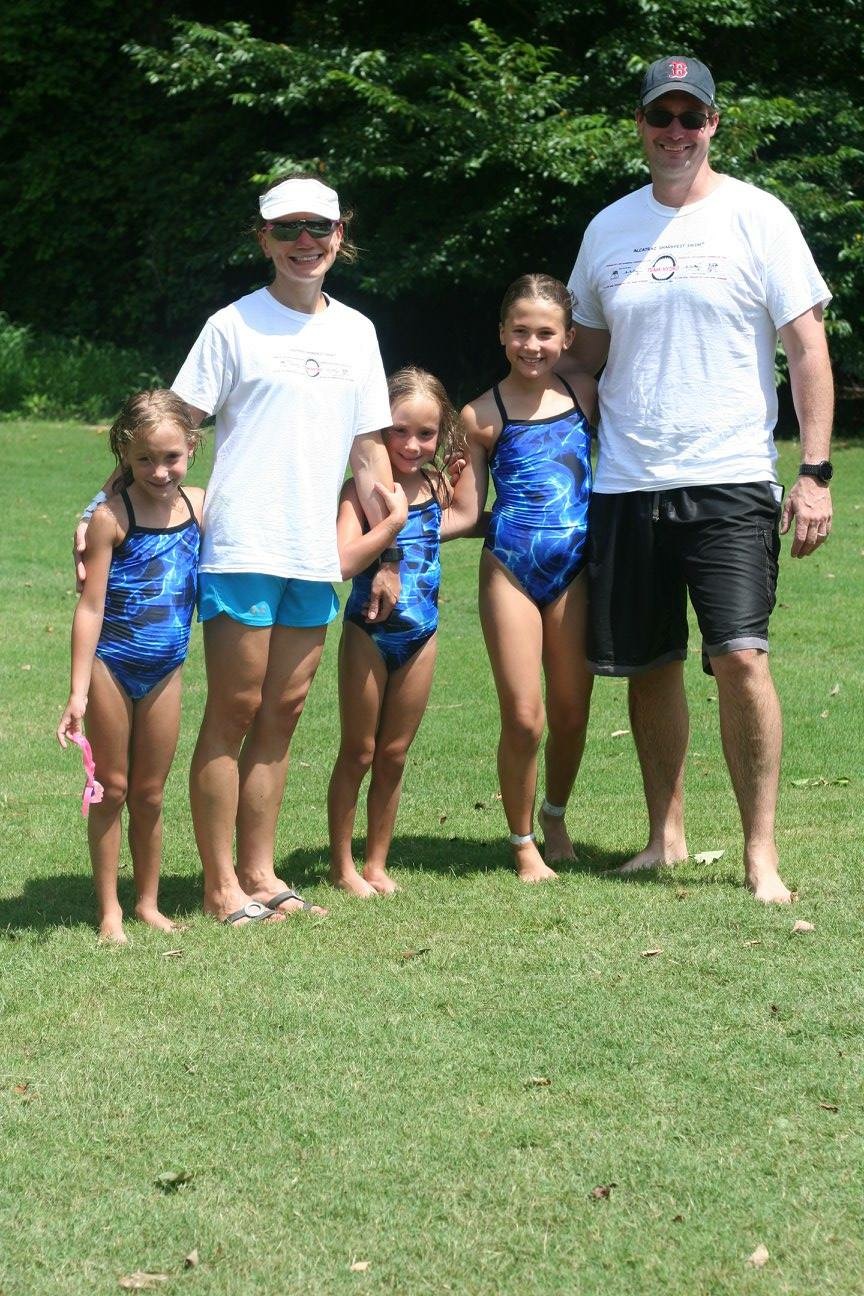 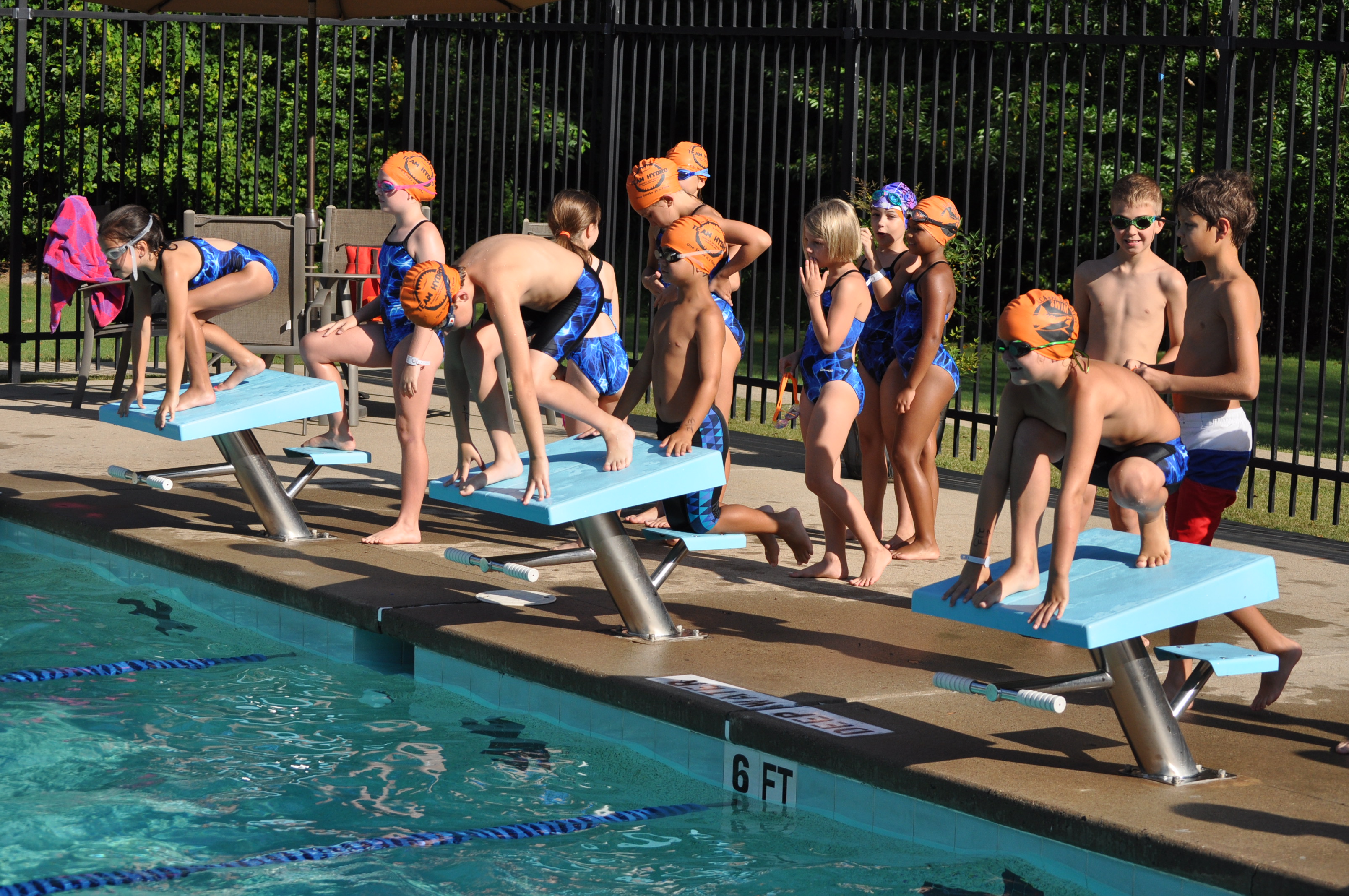 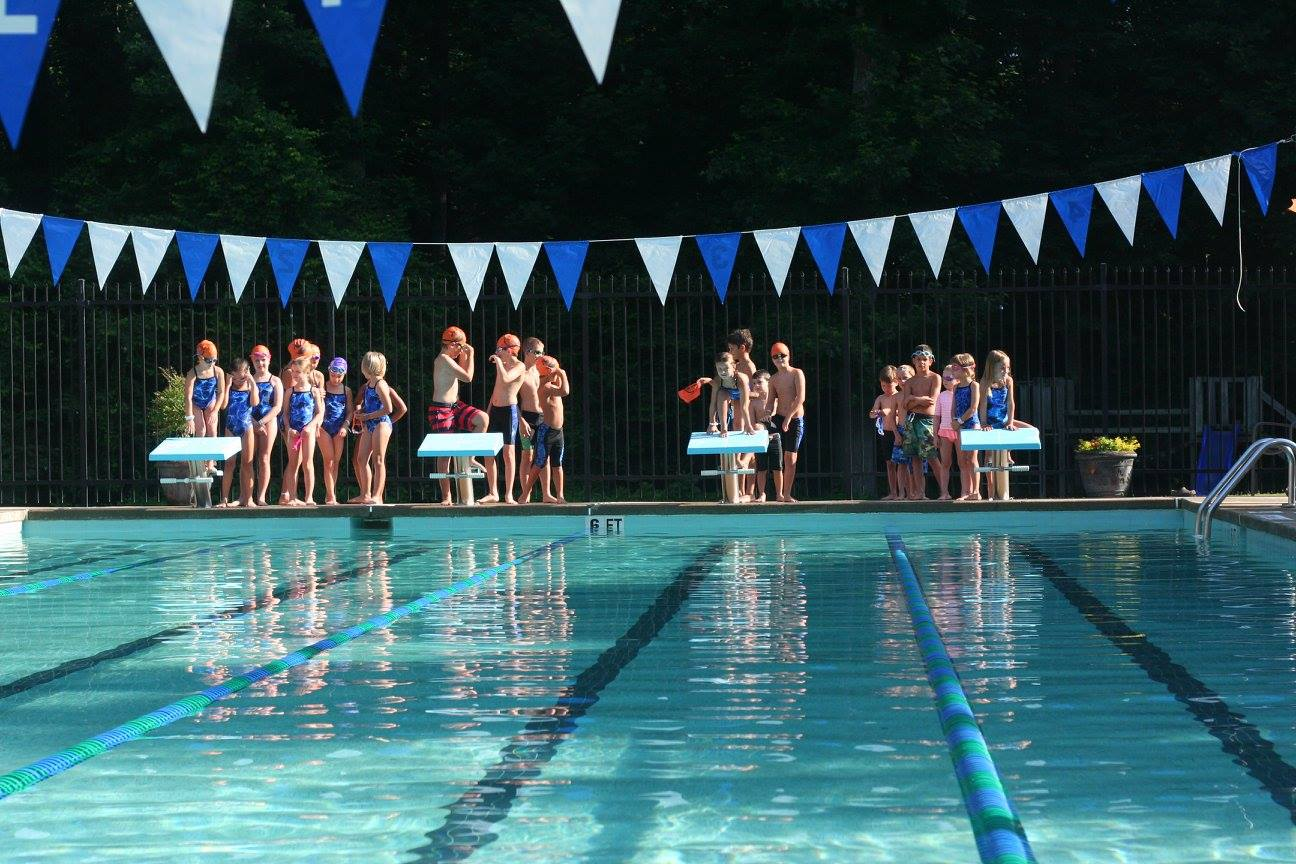 The sun rose with our swimmers in San Francisco this year as Team Hydro gathered on the shores of Aquatic Park for our 10th Alcatraz Swim for Hydrocephalus!  It was a beautiful day all around, as fun was had, friendships were formed, and most important awareness and funds were raised for hydrocephalus!

Swimmers and on-land supporters alike were motivated by the stories of courageous people who are living with or have passed from hydrocephalus, and gained new appreciation for the importance of our mission!  Each swimmer wore a band honoring a specific person living with (or who had passed on due to) hydrocephalus — which served as a potent and sobering reminder of why we do what we do.

One of our swimmers (swimming in honor of Lake, a 10 year  boy who has already shown rare courage in enduring many brain surgeries)  reported that during the race, he developed severe muscle cramps in his leg.  He was about to give up on the swim, and call a kayak to tow him to shore, when he looked down and saw the bracelet he was wearing bearing the name of the young man of which he was swimming in honor. Remembering all that the young patient had endured already in his young life fueled our swimmer with renewed energy and determination.  He reported raising his arm in the air and shouted, “This is for you, Lake!” and he finished the race! 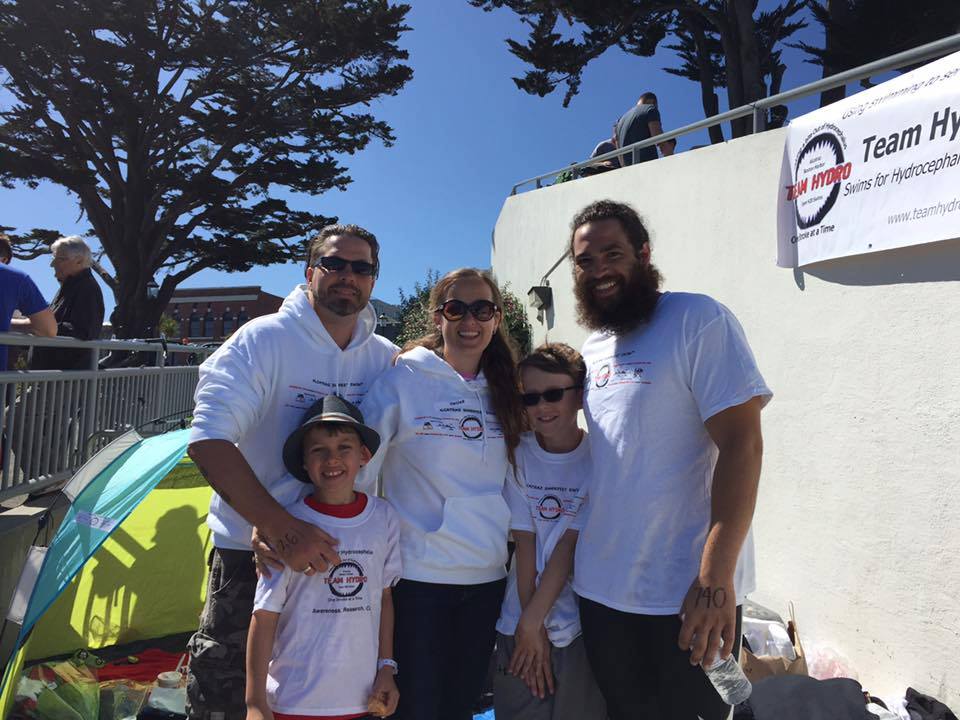 Lake and his family after the Alcatraz Swim!
Best of all, Lake was at the finish line!  Having travelled all the way from Grimsby, Canada to watch his Dad swim from Alcatraz for the first time, Lake’s cheerful nature and determined spirit reminded every Team Hydro swimmer why we do what we do! And why we must not stop until a CURE is found!
Team Hydro members were also inspired by the resilience, strength and determination of fellow Team Hydro swimmer, 16 year old Kyle Voulgaris!!  Kyle, who happens to be living with shunted hydrocephalus, (and made his first crossing when he was only 10) finished the race in an amazing 30:38 minutes — 5th place overall!!
Best of all, as donations continue to come in, Team Hydro has already raised almost $44,000 in 2017! We thank every one of our swimmers, donors, and on-land supporters!
THANK YOU and let’s keep working and swimming until we FUND a CURE!

If you haven’t donated yet, it’s not too late– You can easily donate here now.

Your heart is racing, your face and fingers stinging a tad from the cold.  As you look at the beautiful city skyline off in the distance over the churning chop, you might wonder for a SPLIT second, “Why am I doing this again?”

And no wonder! It is NO ordinary thing to make the swim from Alcatraz Island to San Francisco across the bay!!

Indeed, in order to complete this treacherous swim, our Hydrosharks need jump into the freezing cold bay from a ferry rocking in the waves! Our swimmers then brave freezing water temperatures and fight a fierce and mounting tide as they make their way ,stroke by stroke across the churning bay to a shore, almost 2 miles away!!

Why would anyone even attempt such a thing?!

We at Team Hydro have very good reason–we swim for great cause–to raise awareness and fund for Hydrocephalus Research!!  Make a contribution and tell your friends: www.donate.teamhydro.org

Sunday, June 4th, ~100 members of our intrepid group will once again attempt the Escape! We cant wait to gather on the shore of aquatic Park to join together in our desire to FIND a CURE for Hydrocephalus!

We look forward to seeing all our swimmers and on-land supporters by the Team Hydro Banner at Aquatic Park on Sunday!

See YOU at the Team Hydro Banner!!

Thanks to our friend and swimmer Phil Levi from Burlingame Fitness for the video recapping a past Team Hydro Swim!