2014 was another WONDERFUL year for the Alcatraz swim! Read on to enjoy some great moments from the day!  If you have PHOTOS from the event, POST THEM HERE! You can also check out more videos and photos on our facebook page.  We hope to see YOUR smiling face in Boston in September, or in SF in 2015!! Visit our Team Hydro Event Pages and Register now! 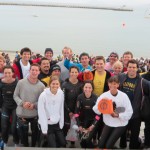 Swimmers gather together bright and early the morning of the Alcatraz Swim! 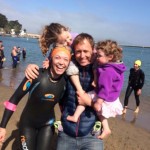 Team Hydro is a family affair! 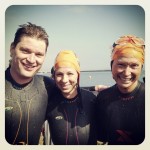 Some of the Fin Fam Post-swim! 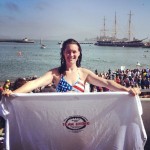 Olympian Jessica Steffens swam with Kate Finlayson growing up. After losing her friend in 2010, she now proudly swims in support of Hydrocephalus Research! Jess holds Gold and Silver medals from London and Beijing! 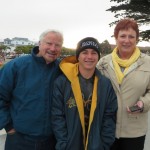 Kyle, who lives with hydrocephalus, was Team Hydro’s first finisher in 2014! 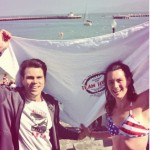 Charlie and Jessica raise the banner for more Research! 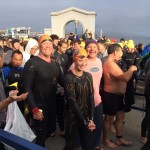 Kate Damrell lives with hydrocephalus, and swam with her dad! 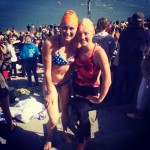 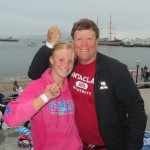 Kate and her dad pose before the swim (see Alcatraz waaaay in the background)? 🙂 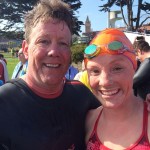 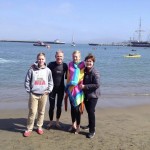 The Welch Clan – each year we get another member! This year, Jim and his son Nicholas joined the cause! 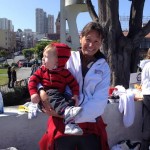 Looking to the SEA already–this little Hydroshark will be in the water in a few more years! 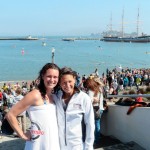 Jessica and Pam smile as other racers finish swimming behind them. 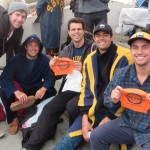 Once again, former members of the Cal Men’s Water Polo Team rallied for for the cause! 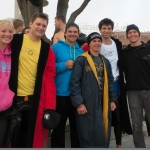 Happy swimmers before taking the plunge!

Every Team Hydro Swimmer successfully completed the 2014 Escape from the Rock!  ALL involved had a great time as we developed camaraderie, recruited some terrific new teammates, and raised LOTS of Awareness (and $$) for our Cause!!  More details, photos, and videos to come, but rest assured, we had another wonderful Alcatraz swim!  We enjoyed a great turnout and a beautiful day (despite some rocking waves in the Bay)!!  Thanks to all our Swimmers, Sponsors, and On-land Supporters for making this the 2014 Alcatraz Swim a Success!

Ready to Swim the Alcatraz Escape with Team Hydro?!!

Registration for the 2015 SHARKFEST is open NOW at: http://www.sharkfestswim.com/default.asp?PageID=20154  Make sure you check the  TEAM HYDRO box on the registration page!!

Some last minute reminders for those attending the swim tomorrow!

Team Hydro Table Location: We have an HQ in the grandstands to gather and listen to pre-race announcements, take a team photo, and walk together to the ferries! (Look for the TEAM HYDRO banner). Make this where you and your loved ones gather before (and after) the swim!

Race Check-in: Check-in runs from 5:30-6:45am. Once you check in at the Sharkfest desk, be sure to come to our Team Hydro Table by the Team Hydro Banner in the grandstands and pick up:

After the Race, be sure to pick up some complementary hot chocolate and snacks in the Team Hydro area. We will also have tee shirts, sweatshirts, hats and towels for sale (cheap to swimmers). 🙂 Show your Team Hydro Pride all year–and perhaps get a few compliments as people realize you conquered the Sharkfest Escape from Alcatraz Swim!!

We are so excited for tomorrow, and honored to swim with you all!

That’s right, this Saturday, June 7th, over 100 swimmers will don special Team Hydro/Sharkfest swim caps before jumping off a ferry to swim the strong, icy currents from Alcatraz Island to Aquatic Park in San Francisco!  These brave, and dedicated Team Hydro Swimmers, all affectionately called “HydroSharks”, are using their swim to raise awareness and research funds to battle a life-threatening and incurable condition called Hydrocephalus.* 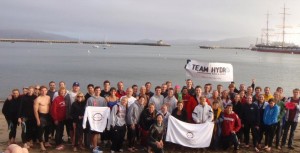 Team Hydro is also very proud to report that  among the ranks this year, will be THREE Team Hydro Cap-wearing Swimmers who will be covering heads which also happen to be implanted with special devices called “shunts”–the most common form of treatment for hydrocephalus patients (and upon which, their lives depend!!)!  (A “shunt” is a catheter and valve system placed in the brain, to regulate the brain’s cerebral spinal fluid –without a working shunt, most persons with hydrocephalus will suffer coma and die.)
The fact that hydrocephalus is a difficult unpredictable condition that can happen to anyone at anytime, is proven by the stories of the Team Hydro members swimming with the condition:
First time Alcatraz swimmer, 17 year old Kate Damrell suffered a congenital form of hydrocephalus diagnosed when she was 7 months old.  Shortly after Kate was born, it was determined that she suffered from a condition where the bones in her skull, normally separate at birth, had prematurely fused together. Little Kate Damrell underwent a very long and painful skull surgery to correct that condition at 7 months, and received her first shunt for hydrocephalus when she was just a year and half old. Since that time Kate has required one shunt revision, as well as another difficult surgery near her brainstem at the base of her skull, in order to keep her hydrocephalus under control. But this has not stopped Kate from approaching life with vigor.  Kate swims for her high school swim team, and is active at school and in her community.  Still, having hydrocephalus has not been easy–in addition to the grueling surgeries, Kate lives with the uncertainty that her shunt could break at any time.  Kate’s father Frank will swim alongside Kate as they raise funds and awareness for research!
The possibillity of a shunt breaking or malfunctioning, is something, second-time Alcatraz swimmer Ryan Purdy understands well!  Ryan, who hails from La Jolla, CA swam his first Escape from Alcatraz Sharkfest very successfully in 2012!  He was all ready to swim last year, but a shunt revision placed him in the hospital instead.  BUT even BRAIN SURGERY could not stop Ryan from swimming again for the Cause!  Ryan returns this year ready to complete his 2nd Alcatraz swim for Team Hydro!  [Update: Ryan tragically slipped a disc in his back, and will be unable to swim this year.  But he’ll be back in 2015!]
Team Hydro’s third member is 16 year old Kyle Voulgaris.  Kyle, a high school student from Santa Barbara, was diagnosed with hydrocephalus when severe symptoms suddenly began for him at age 5.  Fortunately, Kyle’s shunts have worked well for him so far, allowing him to grow into a fast and strong swimmer!  Kyle, though seemingly so young to many of us, will already be completing his 5th Alcatraz Escape this year (where he often has been found atop the winner’s podium for his age-group) and has worked hard to raise funds to help promote hydrocephalus research.  This year Kyle has already secured over $6,000 in donations!!  Way to Go Kyle!!
Team Hydro is so proud of each and every one of our swimmers, sponsors, and on-land supporters, but we hope each of you Hydro-Sharks will understand our wanting to give a special “shout-out” to Kyle, Ryan, and Kate!  Their willingness to look past their own struggles, and work for the benefit of others who suffer their same condition (but often aren’t so lucky as to be able to live full and active lives), is truly INSPIRING !!
So on behalf of all your fellow Team Hydro Teammates:  GO KATE! GO RYAN! GO KYLE! We are especially proud to be and honored by swimming alongside each of you!!
*Hydrocephalus is a neurological condition which occurs when the body is unable to properly regulate the flow of cerebral spinal fluid, or CSF in the brain. It can affect people of any age from babies in utero, to aging adults. An over-abundance of CSF causes a person to experience debilitating headaches, and memory issues. Shunts, while miraculous when working, are notoriously prone to breakage, clogging, and failure.  Patients often must under go numerous brain surgeries to replace their shunts and stay alive and sadly, 60% of children diagnosed with hydrocephalus will never live independently as adults. Team Hydro is working to fund research which will hopefully, one day find a replacement treatment for the shunt, or better yet–a cure for this difficult, life-threatening disease.

Not much has changed in the treatment of hydrocephalus since 1960 (arguably since 1955) when shunts became the standard of care.  To put that in perspective, we wondered, what would life be like if we hadn’t made advances in other areas since the 50’s?  When you look at it this way…isn’t it time for a change?!   Help Support Hydrocephalus Research.

For example, this was cutting-edge photo technology when the shunt was developed… 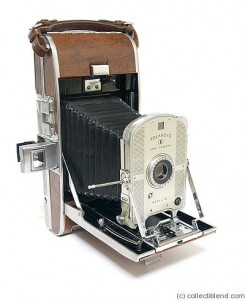 In the world of sports, George Mikan was leading the Minneapolis Lakers to an NBA championship, and a 21 year old Mickey Mantle, along with a 28 year old Yogi Berra, were leading the Yankee’s to a 5th consecutive World Series Championship… 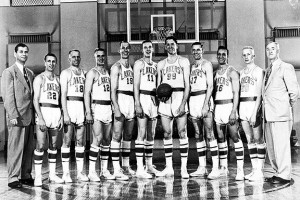 In literature, Ernest Hemingway won the Pulitzer for “The Old Man and the Sea”… 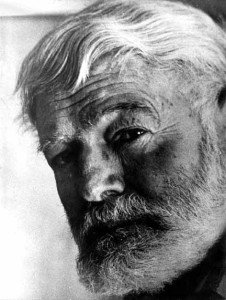 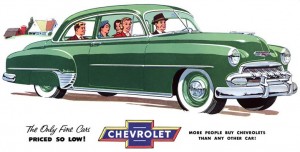 and the ladies were wearing these… 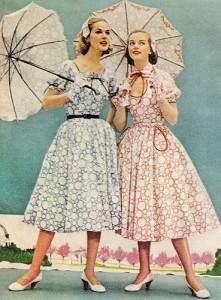 While listening to the Billboard #1 Hit… 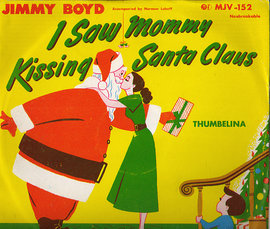 We received an email today from Wells, a 27 year old who was diagnosed with hydrocephalus at age 5.  Honestly, I teared-up as I read it.  We’re thinking of you, Wells, and are proud of the courage with which you face each and every day. Remember, Wells:  YOU ARE NOT ALONE!

“At five years old I was a happy, much loved, little boy who just had always walked on the ball of my foot.  My Mom always worried that this wasn’t normal, and took me to many, many doctors trying to find out what was wrong.  Finally, many appointment’s later, I saw a Neurosurgeon who was world renowned at Children’s hospital in Detroit Michigan.

My family learned I have Hydrocephalus.  They told me I needed a SHUNT placed in my brain.  Little did any of us know that I would be in 46 times for revisions by the time I was 25, one of which ended in a stroke with a six week stay–nothing has been ok since. After years of surgeries and shunt problems, I now have almost no short term memory and more problems than can be told in a few short paragraphs.

I’m frustrated, lonely, because people know I’m different, and they often ignore me, or don’t give me a chance.

I’ve lost my driving privileges and had to move back home. I know I’m right in thinking my life shouldn’t be this way, (having my shunt stop working frequently, so I am in an d out of the hospital all the time, and finding my ability to do things decrease every year as I grew)–Some days I can make the best of it and honestly, other days I’m depressed.

I am now 27 years old and I never know if I’ll be in the hospital tomorrow or not.  It is hard to plan and prepare for a regular job and life.

I thank you for all your efforts to find money for hydrocephalus research, so maybe some other little kid can be spared almost not knowing how a normal healthy life could be.

My Mom who knows me so well, and my Dad who can’t fix me like he can fix almost anything else, helped me write this.   Until better treatment is found, we will struggle on and always strive for just one more good day!!!”  ~Wells B.

Click Here to support research to help Wells and the 1 Million other Americans living with hydrocephalus.

Why are Team Hydro Swimmers ready to jump into the Bay for Hydrocephalus?!

…People “survive” cancer, stroke, traumatic brain injury, only to later DIE from resultant hydrocephalus.
…60% of children diagnosed with hydrocephalus will never live independently!
…1 in 3 shunts (the most common form of treatment) will fail within a year of implantation!
…Up to 20% of Older adults experiencing dementia and thought to have Alzheimer’s, may actually have a  TREATABLE form of Hydrocephalus, misdiagnosed due to lack of awareness!
….Shunt implantations for hydrocephalus are the most common cause of brain surgery in children!
These facts, and more like them, are why we swim!!!
Hydrocephalus remains an incurable and under-research condition!!
Help us make a difference!
Donate TODAY!
http://tinyurl.com/DonateTeamHydro14
Attention Swimmers!!
There is still time to set up your personal donation page! It only takes a minute!
http://tinyurl.com/TH-signup-2014
« Previous Page