We are thrilled to announce that Dr. Michael Piper — sponsored by a Team Hydro seed grant — has won a $500,000 award from the government of Australia to expand his research on the molecular mechanisms of Hydrocephalus.  This exciting progress — and 20:1 “return” on investment for Team Hydro — is the latest of several examples of Team Hydro seed grants that have collectively bloomed into several million dollars of public funding.  Taken together, this success is a strong testament to our research investment model.

Research with a cure in mind

How — exactly — does Hydrocephalus arise?  What are the molecular mechanisms that steer the development of a healthy brain, how do they break down in our beloved patient’s brains, and could we intervene to tip the balance back towards health?  These are among the questions that work like Dr. Piper’s seeks to address.

When Dr. Piper applied for a Team Hydro/HA grant in 2015, he had conducted preliminary experiments which led him to believe that a transcription factor called NFIX might be a key player in the process through which young babies’ brains finish developing after birth. More specifically, he suspected that reduced NFIX might disrupt the migration of radial glia stem cells in the lateral ventricles (the part of the brain that produces most of our CSF, the “hydro” in hydrocephalus). By developing a special mouse that lacked NFIX — and new tools to study it — Dr. Piper proposed to paint the picture of how stem cells relied on NFIX. In so doing, he argued, he could gain insights into how hydrocephalus develops and perhaps guide interventions that could ameliorate its effects.  Given his proposal, we were eager to see what he could find!

In the past several years, Dr. Piper’s theories have held up!  In one recent paper in the journal Neural Development, the lab published the results of the very experiments Dr. Piper proposed to us in 2015. Among (a bunch of!) other results, he included one picture that our readers may appreciate. See the large black hole in right side of the image below?  That is hydrocephalic fluid filling up the ventricles in the mouse without NFIX!  Dr. Piper’s experiments documented this process in rich detail, AND revealed a new molecule that appeared to reverse the effect! 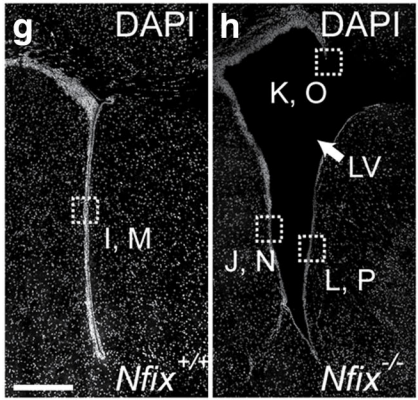 A bright future ahead

Given this success, it is unsurprising that the Australian government has agreed to extensively fund Dr. Piper’s lab to further test and expand these theories and their relevance to hydrocephalus. And given that the receipt of large public research grants is the lifeblood of academic research labs, Dr. Piper is well on his way to a long and highly productive career in this space!  As he does so, the world will not just benefit from his work, but the work of all the students who he trains to be hydrocephalus researchers.

Ultimately, Team Hydro’s grant will be a small drop in the bucket of funding that Dr. Piper will leverage in his research on hydrocephalus. However, particularly these days, it is all-but-impossible for researchers to receive major public grants without the extensive preliminary data made possible through seed grants like Dr. Piper’s Innovator award.

At Team Hydro, we are dedicated to continuing to support promising researchers like Dr. Piper, so that they and their trainees may find firm initial footing within the hydrocephalus space. In doing so, it is our hope that these good men and women will continue to work on hydrocephalus until a cure can be found!

We aren’t done yet!

As always, we continue to underwrite our own overhead, so that 100% of donations received at Team Hydro are used to fund cure-focused research in Hydrocephalus.

Thank you, Dr. Piper!  And thank you to all the swimmers and donors who make Team Hydro possible.

« The father of a new hydrocephalus patient shares his story…
Team Hydro Boasts Full Schedule for 2018! »